An in-depth look at how democratic values have widened the American arts scene, even as it remains elite and cosmopolitan

By chronicling the development of American art from its earliest days to the present, Lena demonstrates that while the American arts may be more open, they are still unequal. She examines key historical moments, such as the creation of the Museum of Primitive Art and the funneling of federal and state subsidies during the New Deal to support the production and display of culture. Charting the efforts to define American genres, styles, creators, and audiences, Lena looks at the ways democratic values helped legitimate folk, vernacular, and commercial art, which was viewed as nonelite. Yet, even as art lovers have acquired an appreciation for more diverse culture, they carefully select and curate works that reflect their cosmopolitan, elite, and moral tastes."

Jennifer C. Lena is Associate Professor of Arts Administration, with Courtesy Appointment in Sociology at Teachers College, Columbia University. She is Co-Editor of Poetics: Journal of Empirical Research on Culture, the Media, and the Arts and also of Culture and Economic Life book series (Stanford University Press). Lena earned her B.A. (1996) as a dual major in English and Sociology/Anthropology from Colgate University, and a Ph.D. from Columbia University (2003). She has worked at Vanderbilt University, Princeton University, Barnard College, the Berlin School of Creative Leadership (Steinbeis), and Columbia University. Her academic research focuses on classification systems, specifically the conditions that facilitate the proliferation or contraction of categories into which art works are sorted. Banding Together: How Communities Create Genres in Popular Music is her first book, and was published by Princeton University Press in early 2012. Her second book, Entitled: Discriminating Tastes and the Expansion of the Arts, was published September 3, 2019.

This event is co-sponsored by the Department of Arts and Humanities.

Please rsvp with your interest and details by Friday, December 12th. 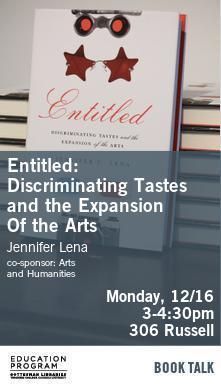