World War 2, Radar, the Atomic Bomb, and the Life of Kenneth Tompkins Bainbridge

Please join us on Monday, July 11th, 4-5pm for an online discussion with David A. Bainbridge, author of Game Changer: World War 2, Radar, the Atomic Bomb, and the Life of Kenneth Tompkins Bainbridge (Rio Redondo Press, 2022).

"World War II has been called the “physicist’s war” because physics underpinned the development of both radar and the atomic bomb. Talented but unpretentious, physicist Kenneth Tompkins Bainbridge had a remarkable career while playing a crucial role in ending WWII. He was the first physicist recruited for the radar lab at MIT and one of the research project team said Ken was a central figure in the development of radar that could detect the deadly German submarines.

Ken was then chosen to work on atomic bomb development at Los Alamos. He and his team had to select the test site, develop the site and then all the instrumentation and details for the test. This was a success, on July 16, 1945. Throughout his career he was credited with not only exceptional skill and successful development of complex projects, but also his effective but kind and gentle management."

Game Changer is an amazing book. It is a thorough and detailed account of one of our civilizations turning points. I knew Mr. Bainbridge as a colleague and friend at Harvard and this book captures him well. He was indeed a Game Changer.

David A. Bainbridge is an ecologist, author, teacher, and historian. After earning his BA in Earth Sciences at UC San Diego in 1970, he went to UC Davis to complete an MS in Ecology in the multidisciplinary Eco-Grad Program. He launched a company doing environmental impact analysis, then transitioned to a solar research and design firm, Living Systems, where he worked on community design, passive solar heating and cooling, building codes and solar rights. He returned to academia and worked on desert restoration at UC Riverside and San Diego State University from 1986-2001. In 1995 he began teaching at Alliant International University, where he retired as Associate Professor of Sustainable Management in the Marshall Goldsmith School of Management. He is the author of 22 books, 20 book chapters, 18 book reviews, and more than 300 reports and articles. He has been honored with awards for teaching, scholarship, and service, and several of his books have won awards.

David Bainbridge is the nephew of Kenneth Thomas Bainbridge (July 27, 1904 – July 14, 1996) who attended Horace Mann School from 1910-1921, before moving on to the Massachusetts Institute of Technology (MIT) and Princeton University. KTB was a lead physicist at Harvard University who worked on cyclotron research. He was Director of the Manhattan Project's Trinity nuclear test, which took place July 16, 1945. Recently remarked David Bainbridge, "It was said this was the physicist's war. Radar and the atomic bomb were both instrumental and Kenneth Bainbridge was a key player in both endeavors. He was a remarkable physicist and nice guy.."

﻿This book talk is co-sponsored by Horace Mann School which, like the Gottesman Libraries of Teachers College, Columbia University, provided assistance with archival research for the publication of Game Changer.

Please rsvp no later than Friday, July 8th, with your interest and details via library support, and a Zoom link will be provided. 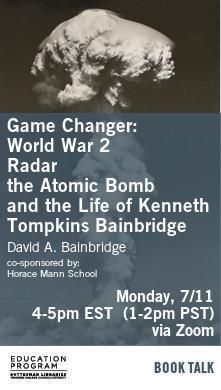