"Adelante showcases an Irish Catholic church on the outskirts of Philadelphia that is attracting the patronage of Mexican immigrants in the area. With a personal glimpse at the lives of the vibrant community members - a remarkable Irish American priest, young Mexican immigrants, and older Irish parishioners - the film shows how churchgoers from various backgrounds have forged meaningful and heartfelt bonds of friendship and understanding. Once moribund, the church has become a place for American parishioners to learn about, accept, and embrace a group of immigrants that breathes new life into the community. The film shares the expectant joy of the newly arrived families as they establish lives in an unfamiliar, often bewildering country that offers opportunities entangled with sometimes painful compromises. At its core, Adelante is a celebration of two groups' growth and an embrace of their evolving community."

This film talk will be attended by Professor Regina Cortina's students in Latinos in Urban Schools, Department of International and Transcultural Studies. 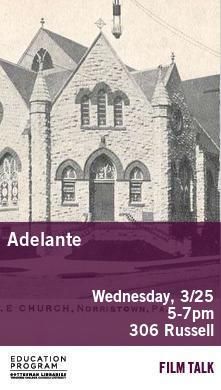