Please join us for a reading and discussion of Class Dismissed (Regal House Publishing, July, 2021) with author and Teachers College alumn Kevin M. McIntosh (M.A. '95), as interviewed by Bruce Henderson, Professor Emeritus of Communication Studies, Ithaca College '"'Student Gives Teacher the Finger' screams the Post headline after Patrick Lynch shuts––slams?––his classroom door on the hand of Josh Mishkin, the learning-disabled son of two NYU professors. Josh’s injury casts Patrick, thirty-year-old son of the Midwest, down a New York City rabbit hole of Board of Ed bureaucracy and union politics. Transformed into an unwilling celebrity by his fellow inmates in that teacher purgatory, the Rubber Room, Mr. Lynch is suddenly more “at risk” than any of his students. Now he must fight his way back to his classroom at Marcus Garvey High School and reclaim the affections of his social worker fiancée, all while wrestling the legend of his late father, Superintendent Lynch, the pride of Peterson’s Prairie, Minnesota.

Set during the “Ed Reform” wars of the 1990s, Class Dismissed offers a fresh lens on the urban teacher tale: an intimate view of teaching and learning, each classroom its own ecosystem, the eye of its own little storm. Seen through the warm and humorous eyes of Patrick Lynch, the crucible of inner-city education, with its stew of race, class and political tensions, provides a portrait of love and loss, a surprising path to self-discovery, and a belated coming-of-age."

Writer and educator Kevin M. McIntosh has a thirty-year career which spans New York City, Oakland and Greater Boston. Class Dismissed, his debut novel, raises such issues as urban versus suburban teaching and race and class equity in the classroom. Kevin’s short stories, many dealing with the teaching life, have appeared in the American Literary Review, Beloit Fiction Journal, Chicago Tribune, Jabberwock Review, Potomac Review, and elsewhere. Stories conceived during residencies at Ragdale and Blue Mountain Center were nominated for Best New American Voices and the Pushcart Prize. Visit him at kevinmmcintosh.com.

Kevin M. McIntosh will be joined in conversation with Bruce Henderson, Professor Emeritus of Communication Studies at Ithaca College, where he taught for over three decades. Dr. Henderson is the author or co-author of three college-level textbooks, two in performance studies and one in queer studies, and is past editor-in-chief of Text and Performance Quarterly and Disability Studies Quarterly. He is recipient of the Lilla A. Heston Award for Excellence in Interpretation and Performance Studies Scholarship from the National Communication Association, as well as the Distinguished Service Award from the Performance Studies Division of that association.

Please rsvp with your interest and details no later than Monday, September 13th, or join the book talk HERE. 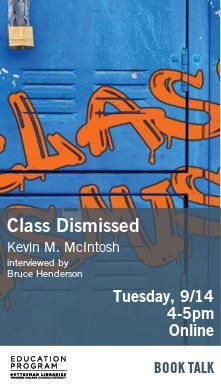