Speaking Up on Erasure, Identity, and Schooling

Please JOIN us for a virtual panel book talk with Dr. Carmen M. Martínez-Roldán and contributors to the recent publication, Latina Agency Through Narration in Education: Speaking Up on Erasure, Identity, and Schooling (New York: Routledge, 2021).

"Drawing on critical and sociocultural frameworks, this volume presents narrative studies by or about Latinas in which they speak up about issues of identity and education. Using narratives, self-identification stories, and testimonios as theory, methodology, and advocacy, this volume brings together a wide range of Latinx perspectives on education identity, bilingualism, and belonging. The narratives illustrate the various ways erasure and human agency shape the lives and identities of Latinas in the United States from primary school to higher education and beyond, in their schools and communities. Contributors explore how schools and educational institutions can support student agency by adopting a transformative activist stance through curricula, learning contexts, and policies. Chapters contain implications for teaching and come together to showcase the importance of explicit activist efforts to combat erasure and engage in transformative and emancipatory education."

A significant volume in the Language, Culture, and Teaching Series, Latina Agency Through Narration in Education is dedicated to" [a]ll Latina women who have fought erasure, whether through small or big agentive and activist efforts; for those who have created networks of solidarity to lift up others and create more equitable learning contexts for our children" -- including the late TC Professor Emerita Maria Torres Guzman," whose social imagination had no limits."

Sonia Nieto is the Founding Editor of the Language, Culture, and Teaching Series (Routledge, 2001--). She has devoted her professional life to questions of diversity, equity, and social justice in education. A native of Brooklyn, New York, Dr. Nieto began her teaching career in 1966 in an intermediate school in Brooklyn, later moving to P.S. 25 in the Bronx, the first fully bilingual school in the Northeast. Her university career started in the Puerto Rican Studies Department at Brooklyn College. She and her family moved to Massachusetts in 1975, where she completed her doctoral studies at the University of Massachusetts, Amherst, returning a year later to begin her long academic career there. She taught and mentored preservice and practicing teachers, and doctoral students at UMass from 1980 until 2006.

Carmen M. Martínez-Roldán (Ph.D. in Language, Reading, and Culture) is an Associate Professor in Bilingual Bicultural Education at Teachers College, Columbia University. Her research seeks to advance both theory and practice related to young Latino bilingual children’s literacy development. Her work contributes to understanding the ways in which this group’s linguistic repertoire, including their storytelling practices, serve as resources for making meaning of texts and for supporting children’s identities. Her more recent work documents the narratives of school community members in Puerto Rico around the closing and re-opening of their schools, which reveal the ways communities in Puerto Rico mobilize their funds of knowledge. Dr. Martinez-Roldán is editor of Latina Agency Through Narration in Education, and her chapters are entitled, "Narrating Erasure, Narrating Agency: Towards a Transformative Activist" and "Narratives as Tools for Agency: Teachers and Students as Activists."

Diana Cordova-Cobo is a Ph.D. candidate in Sociology and Education at Teachers College and a research associate for the Center for Understanding Race and Education (CURE). Her work focuses on the relationship between housing and school demographic change–particularly as it relates to social stratification and the socially-constructed meanings of public spaces. Prior to starting in the Sociology and Education program, Diana was a middle school teacher in the Washington Heights neighborhood of New York City. Ms. Cordova-Cobo's chapter is entitled, "Soy Un Amasamiento: A Critical Self-Narrative on Latina Identity Development."

Maried Rivera Nieves (M.A. in International Educational Development) is a project manager at the Center on Culture, Race and Equity at Bank Street College of Education in New York City. Maried is passionate about helping educators cultivate an anti-racist praxis and school environment, as well as writing and thinking individually and in community about the intersections of race, culture, migration, colonization, and politics. Maried's chapter is entitled, "Growing Old/Growing Up Gringa: Negotiating Puertorriqueñidad and Americanism in the Midwest."

Martha Iris Rosas is a doctoral candidate in the International Transcultural Studies Department at Teachers College. She has worked as a first-grade Spanish-English dual language teacher in the New York City Public School System, as SEEK Counselor in Baruch College, and the Director of Academic Support Services for the School of Education at Long Island University’s Brooklyn Campus. Ms. Rosas' chapter is entitled, "Armonía Con Una Palita De Conflicto: A ‘Latino’ Relationship as Intercultural."

Victoria Hernandez (M.A. in International Educational Development) worked as a Program Manager at Masa, a community-based organization in the South Bronx that partnered with Mexican, Central American, and Indigenous immigrant families to build power and transform their communities through education and civic engagement. She recently moved back home to California and is hoping to continue immigrant and education advocacy in her community of Southeast Los Angeles. Her research interests focus on Central American Studies and center on the transnational experiences of migrant youth from Honduras, Guatemala, and El Salvador. She is also interested in cultivating spaces that foster youth power. Ms. Hernandez's chapter is entitled, "Unearthing el Árbol de Mis Raíces as a First-Generation Graduate Student."

Marisol Cantú (M.A. in Applied Linguistics with a concentration in Bilingual Bicultural Education at Teachers College) teaches English as a Second language at Contra Costa College, in Richmond, CA. In 2016, she was the recipient of the Televisa Graduate Research Fellowship on Latino Education. She serves as a board member of Things That Creep, a non-profit science education program in the Bay. Ms. Cantú's chapter is entitled, "Reclaiming La Lengua: A Self-Narrative on Language Loss, Learning, and Identity."

Elise Holzbauer Cocozzo (M.A. in Bilingual Bicultural Education, at Teachers College) Cocozzo is a first-grade bilingual teacher at Avenues: The World School in Manhattan. Her expertise is in early childhood education, and biliteracy and bilingual acquisition. Ms. Cocozzo Holzbauer's chapter is entitled, "It Takes a Village: Advocating for a Bilingual Student with Dis/Abilities."

Minosca Alcántara (Ed.D. in Interdisciplinary Studies with a concentration in Bilingual Bicultural Education at Teachers College) is the Chief of Scheduling at the Metropolitan Transportation Authority Capital Construction in New York. She is an experienced civil engineer with expertise in construction management in a variety of Architectural, Infrastructure and Wastewater management projects. As one of the few female engineers in her line of work, she is concerned about the lack of representation of Latinas in STEM careers. Dr. Alcántara's chapter is entitled "Teachers' Mentoring Role, or Lack Thereof, in Latinas’ Erasure of a STEM Identity."

Eliza Clark (M.A. in Bilingual Bicultural Education, at Teachers College) first became interested in the mingling of language with identity during her high school years in Cambridge, Massachusetts. After spending several years traveling and teaching around Latin America, Eliza returned to the USA to receive her Master degree in the BBE program. She lives in Brooklyn with her small bilingual family. Ms. Clark's chapter is entitled, "Fill a Void to Create New Space: The Narrative and Counternarratives of Zoraida Lopez."

Patricia Encisco is s professor of Literature and Adolescent Literacies at the Ohio State University in the Department of Teaching and Learning and is Director of the Martha L. King Center for Language and Literacies. She teaches courses in diverse literature and sociocultural theory, and studies youth storytelling. She is co-author of Reframing Sociocultural Theory in Literacy Research (2007), and coeditor of the Handbook of Research on Children’s and Young Adult Literature (2010), and the Handbook of Reading Research: Vol. V. (2020). Her afterword in Latina Agency Through Narration in Education is entitled "To Defy Erasure."

Persons interested in attending are encouraged to RSVP via online support indicating "RSVP" in the subject line of the form and the name of the book talk. Receipt of the RSVP will be acknowledged, along with confirmation of the LINK to the event. 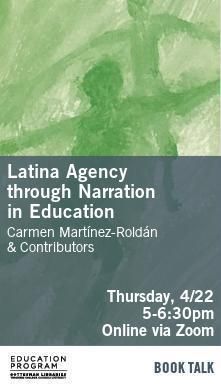