Online Book Talk: She Would Be King, with Wayétu Moore| Event - Gottesman Libraries

Online Book Talk: She Would Be King, with Wayétu Moore

Please join us for conversation with Wayétu Moore, TC alumna and author of She Would Be King (Graywolf Press, 2018), described as "a novel of exhilarating range, magical realism, and history―a dazzling retelling of Liberia's formation".

"She Would Be King is a spectacular blend of history and magical realism that follows three extraordinary characters: in the West African village of Lai, red-haired Gbessa is cursed with immortality at birth and lives in exile under suspicion of being a witch; on a plantation in Virginia, June Dey hides his unusual strength until a confrontation with the overseer forces him to flee; and in the Blue Mountains of Jamaica, Norman Aragon, the child of a white British colonizer and a Maroon slave, learns to fade from sight at will. When the three of them meet in the colony of Monrovia, it isn’t long before they realize that they are all cursed—or, perhaps, uniquely gifted. Together they protect the weak and vulnerable amid rising tensions between the American settlers, French slave traders, and indigenous tribes.

In her transcendent debut, Wayétu Moore reimagines the tumultuous and dramatic story of Liberia, a country whose past and present are inextricably bound to the United States. With great poise and lyricism, she captures the epic excitement of a nation’s founding and explores themes of community, loyalty, and the complex ties that bind the African diaspora. She Would Be King resonates deeply with our current moment and, as Edwidge Danticat observes, 'boldly announces the arrival of a remarkable novelist and storyteller.'"

Wayétu Moore is a Liberian-American author and social entrepreneur. Her debut novel, She Would Be King was named a best book of 2018 by Publishers Weekly, Booklist, Entertainment Weekly & BuzzFeed. The novel was a Sarah Jessica Parker Book Club selection, a BEA Buzz Panel Book, a #1 Indie Next Pick and a finalist for the Hurston/Wright Award.

A graduate of Howard University, University of Southern California, and Columbia University, Moore is the recipient of the 2019 Lannan Literary Fellowship for Fiction and founder of One Moore Book, a non-profit organization that creates and distributes culturally relevant books for underrepresented readers. Her first bookstore opened in Monrovia, Liberia in 2015.Her writing can be found in The New York Times, The Paris Review, Frieze Magazine, Guernica, The Atlantic Magazine and other publications. She has been featured in The Economist, NPR and Vogue, among others, for her work in advocacy for diverse children’s literature.

This event is co-sponsored by the Teachers College African Studies Working Group, George Clement Bond Center for African Education, and Office of Graduate Student Life and Development. Discussion will be led by Akosua Ako-Addo, Obi Eneh and Carolyn Swen, all of whom are M.A. candidates in the International Educational Development program.

This is the final event of the Buddy Read series for She Would Be King.

Please rsvp at your earliest convenience. 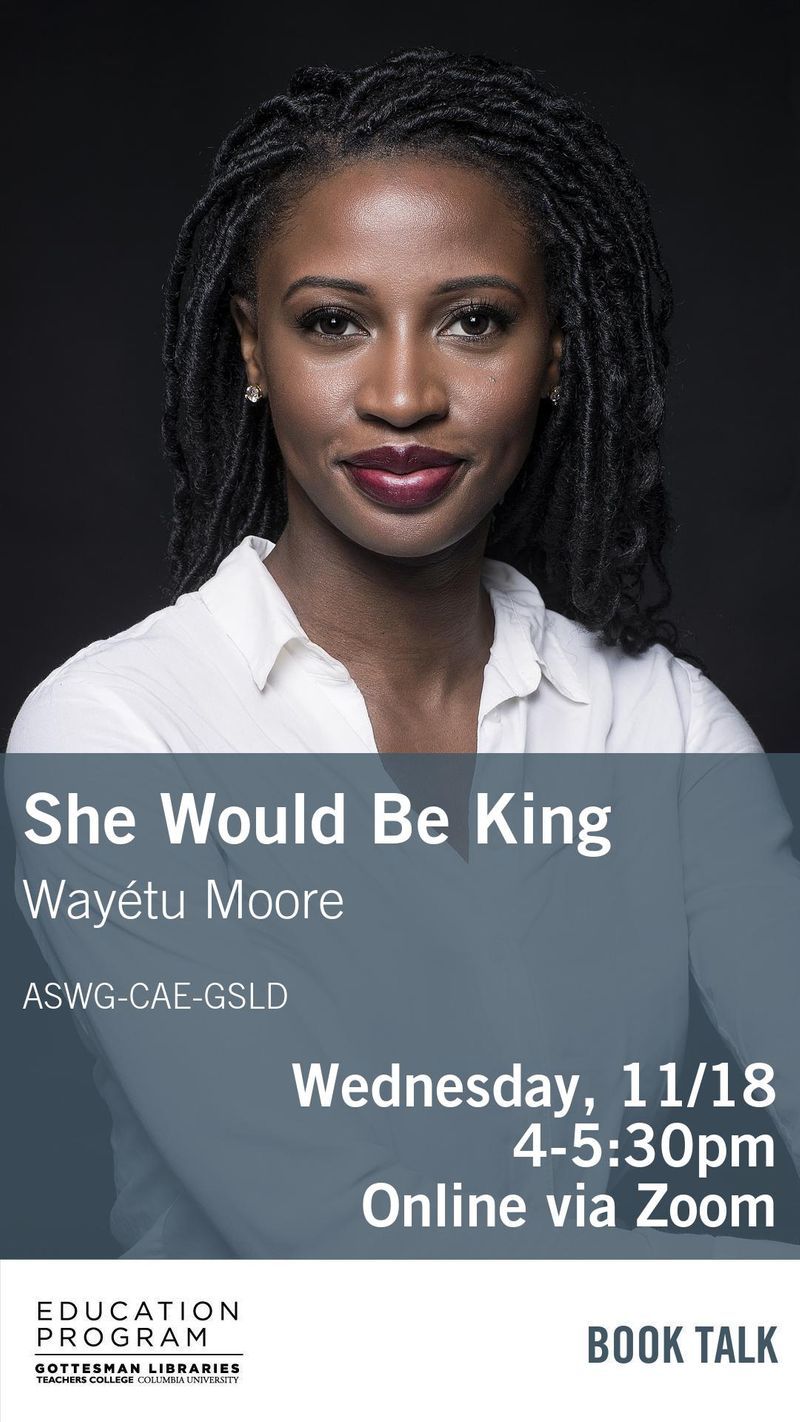