Artivism: The Power of Art for Social Transformation

Former Marine and graduate of Adelphi's Criminal Justice and Anthropology departments, Julian McBride is the founder of the non-profit Reflections on War (R.O.W. Initiative). Weaving heart wrenching accounts of war with his own experiences, Julian has created images that highlight the basic premise that all deserve dignity, respect and protection, and that a victim is more than just a statistic. The R.O.W. Initiative began as a student-initiated and -run anthropological field expedition that sought to establish a philanthropic wing for the victims of human conflict. In highlighting the catastrophic and devastating effects of these conflicts on the surrounding populations, Julian and his colleagues hope to both inform and shock the audience into action.

Julian McBride is a human rights officer at the United Nations and a forensic anthropologist. He oversees human rights abuses and war crimes in the Balkans and Middle East regions. Julian was a double major in Criminal Justice and Anthropology with a minor in Sociology at Adelphi University. Through independent research with Professor Stephanie Lake and Professor Argie Agelarakis while an undergraduate, Julian started his own non-profit, the Reflections of War Initiative, which tells the stories of the victims of war through art and research. Some of his accolades include serving as President of the Criminal Justice Club; presenting his research at NCUR at the University of Memphis; Adelphi Research Day honorable mention; voted Best Capstone in Anthropology in 2017; and induction into Lambda Alpha Honor Society. In his spare time, Julian writes for multiple journal and science outlets and recently co-published an article in the February edition of Ancient Origins Magazine. He is also a veteran of the US Marine Corps and served in Afghanistan. 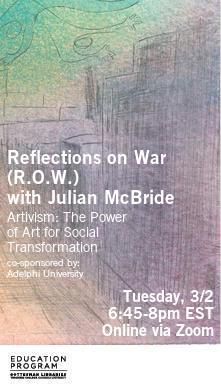 "The concept for this book is inspired by the late Maxine Greene (2000), who described her enduring philosophical focus and legacy of social imagination as “the capacity to invent visions of what should be and what might be in our deficient society, on the streets where we live, in our schools” (p. 5). The purpose of this volume is to examine and illuminate the roles of community organizers and educators who are changing lives through public art and community arts projects. This research originally emerged from a well-attended 2018 conference presentation and exhibition at Teachers College, Columbia University, engaging with the local and international community of arts education and arts administration."

The mission of this interdisciplinary, multi-institutional collaboration is to engage people in changing society through the power of art. Artivism: The Power of Art for Social Transformation offers multimodal events where presenters share how art, research, community outreach, and other endeavors serve to transform the status quo and nurture change for continuous action in search of a more just society. The program is co-sponsored by Adelphi University and Gottesman Libraries. 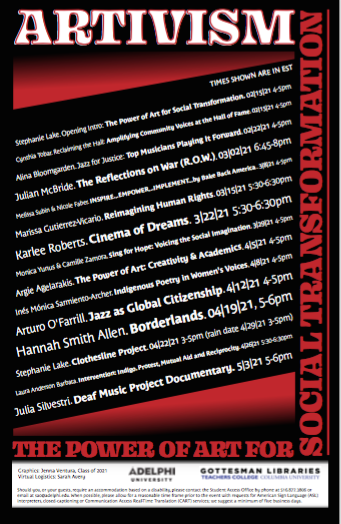