How Black and Brown Parents, Students and Members of Low-Income Communities of Color Organized to Dismantle the School-to-Prison Pipeline in Their Local Schools and Built a Movement That Spread Across the Country

Topic: Willful Defiance: The Movement to Dismantle the School-to-Prison Pipeline

Please join us for a panel book talk with Mark R. Warren and guests on his latest book, Willful Defiance: The Movement to Dismantle the School-to-Prison Pipeline (Oxford University Press, November 2021). The author and panelists will reflect on the book and the history of the movement to dismantle the school-to-prison and discuss their current work campaigning for police-free schools.

"In Willful Defiance, Mark R. Warren documents how Black and Brown parents, students, and low-income communities of color organized to dismantle the school-to-prison pipeline in their local schools and built an intersectional movement that spread across the country. Examining organizing processes in Mississippi, Los Angeles, Chicago, and other localities, he shows how relatively small groups of community members built the power to win policy changes to reduce suspensions and expulsions by combining deep local organizing with resources from the national movement. As a result, over the course of twenty years, the movement to combat the school-to-prison pipeline resulted in falling suspension rates across the country and began to make gains in reducing police presence in schools, especially in places where there have been sustained organizing and advocacy efforts.

In documenting the struggle organizers waged to build national alliances led by community groups and people most impacted by injustice rather than Washington-based professional advocates, Warren offers a new model for movements that operate simultaneously at local, state and national levels, while primarily oriented to support and spread local organizing. In doing so, he argues for the need to rethink national social justice movements as interconnected local struggles whose victories are lifted and spread, In the end, the book highlights lessons from the school-to-prison pipeline movement for organizers, educators, policymakers and a broader public seeking to transform deep-seated and systemic racism in public schools and the broader society."

Mark R. Warren is Professor of Public Policy and Public Affairs at the University of Massachusetts Boston. A sociologist and community-engaged scholar, he studies and works with community, parent and youth organizing groups seeking to promote equity and justice in education, community development and American democratic life. Warren is the author of several books, including Lift Us Up, Don't Push Us Out! Voices from the Front Lines of the Educational Justice Movement (2018); A Match on Dry Grass: Community Organizing as a Catalyst for School Reform (2011); and Fire in the Heart: How White Activists Embrace Racial Justice (2010). Warren has co-founded several networks promoting activist scholarship, community organizing and movement-building, including the Peoples Think Tank on educational justice, the Urban Research Based Action Network, and the Special Interest Group on Community and Youth Organizing in the American Educational Research Association. He has won a number of prestigious awards, including a Guggenheim Fellowship, and is a Fellow of the American Educational Research Association.

Jonathan Stith is Director, Alliance for Educational Justice and co-director, National Campaign for Police-Free Schools. He has 20 years of experience working with youth and community organizations to address social inequities. As the former Executive Director of the Youth Education Alliance (YEA), he was a critical leader in the School Modernization Campaign that won 3.2 billion dollars for school renovation and repair in the District. He was also a steering committee member of the Justice for DC Youth Coalition that successfully organized youth and their families to win critical juvenile justice reforms in the District.

Letha Muhammad is Director, Education Justice Alliance (Raleigh, NC) and coordinating committee member, Dignity in Schools Campaign. She is working to advance the organization's impact on dismantling the School to Prison and School to Deportation Pipeline in their local school district, Wake County Public Schools, and in other districts across the state. She believes that one of the most effective ways to dismantle the School to Prison Pipeline is to work with parents and families that are directly impacted by this issue which will help ensure that Black and other students of color have access to a quality education.

This book talk is co-sponsored by the Department of Educational Policy and Social Analysis.

Please rsvp with your interest and details no later than Wednesday, December 1st, and a Zoom link will be provided. Or Join HERE. 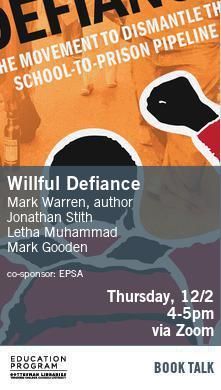