Artivism: The Power of Art for Social Transformation

The situation in which the indigenous nationalities of the Ecuadorian Amazon rainforest lives are becoming more and more difficult due to the persistent environmental contamination in various sectors of the Amazon territory.

This has led to intense social mobilizations of the Amazonian indigenous people’s inconsistent claims to the State regarding its absence as a protective agent in the face of the eminent environmental contamination caused by the companies that extract natural resources.

Ecuador’s environmental legislation in its entirety and without any contradiction protects the right of civil society to participate in decision-making in the exploitation of said natural resources. Thus, several articles promote the participation of communities in the formulation and planning of extraction; the participation of civil society in the Decentralized System of Environmental Management on environmental management and natural resource management is established. Furthermore, however, we understand that aboriginal communities find state absenteeism as well as the lack of space for them in decision-making as a flagrant violation of Ecuador’s environmental legislation.

The violation of the bilateral contracts between extracting companies and the State fall into the frontal infringement of the Ecuadorian environmental law and its Constitutional Charter, the constitutional and human rights of citizens against the native Ecuadorian indigenous populations, as well as against the State’s own territorial patrimony, then lead this investigation to the following questions:

Joyce Sanchez Espinoza is the founder and director of Intercultural Cardboard Press / Cartonera Intercultural and currently serves as County Committee Member for District 37, Queens, NYC; Secretary of the Family Preservation Committee in National Action Network, NYC Chapter, parent advocate for Parents in Action, Inc, a Queens community based non-for-profit organization and community. She also hosts a weekly radio show “Parents in Action” at Radio Impacto 105.5 FM in NYC. She led the Visual Arts Program of Centro Cultural Barco de Papel from 2016-2018 managing several art projects for the artistic community in Queens. She studied Intercultural Pedagogy and Anthropology in Linkoping University and Stockholm University, Sweden from 1996-2000 and Visual Arts at LaGuardia Community College, NYC in 2015. Joyce has participated in several academic art events, art shows as an interculturalist visual artist and writer Her work is related to social justice causes and cultural and political identity, such as Bordersongs, a poetry book title published in 2016 and The Bird Man, Waranka Llimpi, published in 2011. She currently serves in the collective Coalition of Artists For The Amazon.

“The Ecuadorian Amazon does not have a political flag. It is homeland and national heritage where the sovereignty of the people lies. Whoever does not defend it is not worthy of being called Ecuadorian. “Jese Artist

Eli Art was born in San Salvador, El Salvador. Sonia is a self-taught painter. In 2001, Eli Art immigrated to the United States seeking the dream of a better life and future for her children. She feels blessed to have the many opportunities found in this country and the ability to grow artistically. Seeking to give back to her community, Sonia began to get involved in community events and eventually was offered the opportunity to host her first art exhibition at the offices of the Consulate of El Salvador in Brentwood, NY. In 2016 she was the president of the Active 20-30 Club in Brentwood, an organization of young community leaders that were seeking to assist underprivileged children in Central America. Sonia is a member of the Poet Lair Club, trying to rescue poetry and Latin American idiosyncrasy on Long Island. She is the founder of The International Art Focus group; their mission is to help discover and foster the artistic abilities in young people as they learn to artistically express themselves and grow through the arts. Sonia’s community involvement has taken her to partner up with in the Brentwood Art Festival, Puerto Rican Day Parade, First Hike Hispanic Cancer on Long Island, Long Island Immigrant Alliance, Long Island Latino Teachers Association, Teatro Yerbabruja, and the Independent Salvadoran Committee, among many others.

We denounce the political and judicial corruption that promotes an unjust democracy that castrates the human right of the world ecosystem.” Eli Art 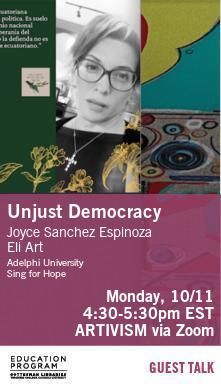 The vision of Artivism: The Power of Art for Social Transformation is to generate a movement with committed social artivists in response to historic global unrest. Artivism aims to generate community through multi-disciplinary teamwork for a more dignified and meaningful coexistence, however you define these terms. The goal of this initiative is to nurture confidence in taking continuous action from wherever you are by means of reciprocity.

Artivism: The Power of Art for Social Transformation is a collaboration between Adelphi University; Gottesman Libraries, Teachers College, Columbia University; and Sing for Hope.

Artivism: The Power of Art Social Transformation, grew out of Illuminations of Social Imagination: Learning From Maxine Greene, (Dio Press, 2019), edited by Teachers College alumni Courtney Weida and Carolina Cambronero-Varela, and Dolapo Adeniji-Neill, of Adelphi University. "The concept for this book is inspired by the late Maxine Greene (2000), who described her enduring philosophical focus and legacy of social imagination as “the capacity to invent visions of what should be and what might be in our deficient society, on the streets where we live, in our schools” (p. 5). The purpose of this volume is to examine and illuminate the roles of community organizers and educators who are changing lives through public art and community arts projects. This research originally emerged from a well-attended 2018 conference presentation and exhibition at Teachers College, Columbia University, engaging with the local and international community of arts education and arts administration."