Warping the Future: In Conversation with Alex McLean (online)

Following the opening of Warping the Future, the Gottesman Libraries' commissioned art, we are hosting a series of conversations with artists featured in this exhibit. “In Conversation With” explores the artist’s projects, their take on the relationship between craft and technology, and how their practice relates to this intersection.

Alex McLean is a researcher at Deutsches Museum, Munich on the PENELOPE project, and he collaborates as a generalist with FoAM Kernow. He made the TidalCycles live coding environment. Since 2000 he has performed algorithmic and live coded music widely, performing solo as Yaxu. and as part of CCAI, one third of slub, and half of Canute. He also works with Kate Sicchio on the code+dance project Sound Choreographer <> Body Code and has sometimes improvised with such good folks as xname and Leafcutter John. His solo Peak Cut EP was released on Computer Club in 2015. I’ve been working on my album since forever. Alex is co-founder of algorithmic dance music promoters algorave, software art repository runme and on-line forum lurk. He is also co-founder of TOPLAP (a temporary organisation for the promotion of live algorithm programming), co-organiser of dorkbotsheffield, and latterly dorkbotlondon. He completed my PhD thesis “Artist Programmers and Programming Languages for the Arts” in late 2011, supervised by Geraint Wiggins within the ISMS group in Goldsmiths. He volunteer with Access Space, a charity working in the area of free digital culture in Sheffield, England. 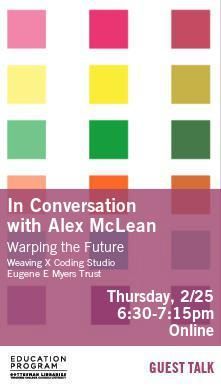 Funded by the Eugene E Myers Trust, Warping the Future: How Craft Led To the Digital World As We Know, is an interactive exhibition that explores the history of crafting and the history of computing. It is presented in three stations: "Humans as Machines" exploring the history of weaving by interacting with a variety of looms, including the backstrap loom, warp-weighted loom, tapestry loom, floor loom, and Jacquard loom; visitors will learn about the origin of weaving, how ancient societies used them and which materials they weaved with. "Humans Automating Machines" delves into the "punch card way" as the core intersection between programmed computers and looms; visitors are exposed to the origins of programming by learning the logic behind the punch cards. In "Machines as Humans", viewers can search for curated collection of projects that illustrate more contemporary connections between ancient and new technologies.

Francesca Rodriguez Sawaya is a Peruvian creative producer and educator based in Brooklyn, New York. Francesca is a Lead Teacher in NYC First where she develops curriculum, manage a Maker Space and teach STEAM related subjects to low income communities. Her workshops include Creativity Lab at Brooklyn Museum and Tangible Data in Ahmedabad, India. Francesca earned an MPS in Interactive Telecommunications from Tisch School of the Arts, New York University, a BA in Communication from the University of Lima, and a Diploma in Audiovisual Education from the University of Salamanca.

Renata de Carvalho Gaui is a Brazilian designer, artist, and creative technologist based in Brooklyn, New York. A "jill of all trades within art, design, and technology," Renata has engaged in numerous projects with positive educational impact, including Beyond Punch Cards, Weaving to Code, Coding to Weave; and The Art of Living, the 2018 Myers Fund Art Commission. She holds an MPS in Interactive Telecommunications from Tisch School of the Arts, New York University, and a BFA in Design and Digital Media from Pontifical Catholic University of Rio de Janeiro.