Exhibit: Through Our Eyes, through November - Gottesman Libraries

Exhibit: Through Our Eyes, through November

Exhibit: Through Our Eyes: The Shots of Young Migrants Forced Into the Greek Hotspot of Samos

The photography project "Through Our Eyes" shows the daily lives of asylum seekers living in the "hotspot" camp on Samos Island, Greece, through their own eyes.

The Samos "hotspot" camp is a detention center for asylum seekers crossing into the European Union from Turkey. Since the EU-Turkey Deal in 2016, all asylum seekers found in Greek waters are detained in hotspot camps in Lesvos, Samos, Chios, and Kos. The Samos camp is a re-purposed military base that was built for 650. However, today the camp and the olive groves surrounding it ("the jungle") are home to over 4,000 men, women, and children from more than 15 countries.

Behind the camera, instead of reporters and journalists, we find teenage boys and girls who have been living in this camp for months. The young photographers are students at the Mazi youth center, the only educational option for them on the island, run by the NGO Still I Rise. Founded in June 2018, Mazi provides informal education and psychosocial support for children aged 12-17 living in the camp. Students involved in "Through Our Eyes" participated in the Mazi photograph workshop which began in December 2018. The class, run by Nicoletta Novara, an experienced photojournalist and long-term educator at the school, is made of 7 modules: history of photography, portrait, movement, using light(s), black and white, street photography, and editing. At the end of the workshop, students were given a disposable Kodak camera and the assignment of showing heir daily life outside Mazi.

The result is "Through Our Eyes", where students put what they learned in class into practice, while giving their personal interpretation to the assignment. These photos were all taken using techniques from their weekly photography class. They show us the daily reality and the emotional struggles of children trapped at the edge of Europe, at the mercy of geopolitical negotiations that take no account of their need to survive, to learn, to flourish, and to grow. We believe this is the most concrete and tangible way bringing attention to the impossible and inhumane situation that needs to change, now, and of letting students shows their world through their own eyes.

Many of the individuals and families depicted in these photos have fled political persecution and violent conflict in their homelands, and thus all of the images in this particular exhibition have been selected to preserve individuals' anonymity.

-- from Through Our Eyes 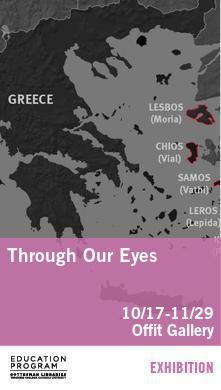