Welcome to an exhibition of selections from the Mary Adelaide Nutting Collection from Gottesman Libraries archive.

This selection is being displayed in honor of a recent gift of two antique nursing caps belonging to TC alumni Dr. Rachel Louise McMannus to the collection by her family.

In 1907, in recognition of Miss Nutting's outstanding ability as a leader and administrator in the field of nursing education, she was called from her position as director of the Johns Hopkins Hospital School of Nursing, in Baltimore, to be the first professorial chair of Nursing Education in Teachers College or any other university. The four volume History of Nursing written jointly by Miss Nutting and Miss Lavinia Dock is still considered the authoritative work on this subject. During the first World War, as chairman of the Nursing Committee appointed by President Woodrow Wilson, Miss Nutting left a brilliant record of swift and efficient organization to increase the supply of nurses and co-ordinate their services. In 1921, in recognition of Miss Nutting's conspicuous service to nursing education and public health, she was awarded an honorary Master of Arts degree by Yale University. In 1944, Nutting was awarded a medal in her name, presented by the National League of Nursing.

In the international field, she was active in the founding and work of the International Council of Nurses. She is honorary president of the Florence Nightingale International Foundation which, since 1934, has conducted a course in London for graduate nurses from all parts of the world. During her work and travels in aide of nursing education, Mary Adelaide Nutting amassed an extensive collection of nursing-related objects, artifacts and texts from around the world. She was particularly interested in memorabilia connected to Florence Nightingale, who pioneered modern nursing practices and education.

This collection reflects some of her most interesting treasures, housed here at the Gottesman Libraries Archive. Since so many of the objects are delicate, in addition to photographs, physical reproductions have been made for viewers to handle.

This exhibit also celebrates the Year of the Nurse / Midwife and the 200 anniversary of the birth of Florence Nightingale. Be sure to check out the interview with Kathleen O'Connell, Isabel Maitland Stewart Professor of Nursing Education at Teachers College, Columbia University.

See the rhizr which shows the exhibit online. 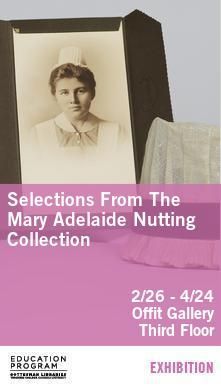