The 2020 huge and historic election records the highest number of popular votes; oldest person to win the presidency; and first woman and first woman of color elected as Vice President -- a remarkable achievement in a nation beset by deep political divisions; mounting civil unrest over racial injustices; continuing global pandemic; major economic downfalls; and serious climate issues on all levels -- physical, social, and emotional. Temperatures are running high, with Democrats celebrating the Biden-Harris victory, and Republicans alleging voter fraud, ignited by Trump's refusal to concede the election, as the world tunes in.

The United States is moving forward into a new year and new era, however we cast our votes, and it's fitting to take stock through reading and deeper conversation about the political process, meaning of democracy, and other influences shaping our health as a nation. Coming Together: Post Election invites us to reflect on this unprecedented time, while encouraging greater unity in the sharing of our concerns and challenges as educators and citizens, despite whatever political differences we may have.

At the Everett News Cafe, you'll find a new book collection every few weeks that relates to current affairs, education, or learning environments. 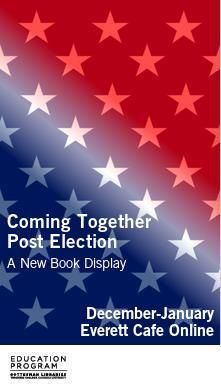