In recognition of National Poetry Month, we highlight select resources that offer both primary source material, literary criticism, and the teaching of poetry at all levels.

Alexander Street Literature is a comprehensive, cross-searchable package of collections covering literatures of place, race, and gender. It includes poetry, short fiction, and novels, along with full-text plays and film scripts. Examples include:

JSTOR, a scholarly journal archive, provides page images of back issues of the core scholarly journals in the humanities and social sciences from the earliest issues to within a few years of current publication. Users may browse by journal title or discipline, or may search the full-text or citations/abstracts. New issues of existing titles and new titles are added on an ongoing basis. 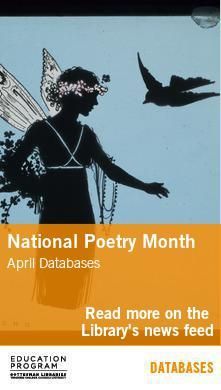