"Peacing Shirley," is an artwork centering on the significant contributions and lasting impact of Teachers College alumna Shirley Anita Chisholm, an American politician who in 1968 became the first black woman elected to the United States Congress. A native New Yorker, Chisholm represented New York's 12th congressional district, a district centered on Bedford–Stuyvesant, for seven terms from 1969 to 1983. She also was the first woman and African American to seek the nomination for president of the United States from one of the two major political parties (1972).

Monben's intention for “Peacing Shirley” is to use the power of artistic imagination to simultaneously invoke Congresswoman Chisholm’s dedication to democracy and public service (symbolized by Capitol Hill); her commitment to peacemaking and collective action for justice (symbolized by the hand gesture); and her everlasting connection to Teachers College (symbolized by the color blue in the painting) -- all in one visual experience. The purpose of having the original painting, executed in acrylic on canvas and photographically reproduced in segments, is that it serves as a play on the homophones “peace/piece”. The original painting will be installed later this year in the landmark Tudor Room, 271 Grace Dodge, a permanent gallery for some of Teachers College's most prized historical portraiture.

"Peacing Shirley" doubles as an allusion to a contemporary register of English spoken by [Black] Americans on the East Coast in places like New York and New Jersey, where to “peace” someone (i.e. “She peaced me when she saw me”) means to greet them or say hello to them.

The accompanying Everett Cafe book display, Representations of Black Women in Twentieth Century United States and Beyond, curated by Monben and on display through October, pieces together different aspects of congresswoman Shirley Chisholm's multi-faceted and wide-reaching legacy and serves to illuminate the artwork on display in the Kasser Family Exhibition Space, library atrium.

Monben Mayon is a graduate student in TC's Anthropology and Education Program (MA, 2023). She earned her BA in African American and African Studies from Rutgers University (2020). A poet, scholar, and painter from Newark, New Jersey, she was born in Monrovia, Liberia. Her immigration to the United States in her childhood, as well as her reflections on Liberian and African-American culture, have sparked her research interests in the African diaspora. Monben is a 2022 Gottesman Libraries' commissioned artist whose work is graciously supported by the generosity of the Myers Foundations.

"Peacing Shirley" and the accompanying book display were planned and executed in collaboration with Trisha Barton, Gottesman's Lead Designer. 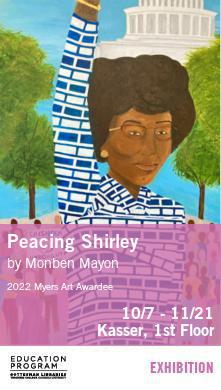 Back to skip to quick links