New Exhibition: Let Us Put Out the Fire of War

New Exhibition: Let Us Put Out the Fire of War

The Passow Collection of Israeli Children's Peace Art, Part One

A. Harry Passow (November 9, 1920 - March 28, 1996), Jacob H. Schiff Professor Emeritus at Teachers College, Columbia University, was one of the first educators to study the needs of intellectually gifted children. He wrote extensive books, chapters, and articles on education, among them, Learning Together: Israeli Innovations in Education That Could Benefit Americans (American-Israeli Cooperative Enterprise, 1995), co-authored by Geoffrey Bard Mitchell. He was appointed Visiting Professor of Education at Tel-Aviv and Bar-Ilan Universities (Spring, 1981) and Senior Researcher at Hadassah-Wizo-Canada Research Institute, Jerusalem (Spring, 1973). Dr. Passow advised the Government of Israel on creating that country's first school for gifted adolescents, and he also served as President of the World Council on Gifted and Talented Children.

The Passow Collection of Israeli Children’s Peace Art was donated to Teachers College, Columbia University by Dr. Passow in the 1990s; it consists of 53 drawings and paintings, most in watercolor, by Israeli children, both Jewish and Arab. It is significant that both cultures are represented and they share similar representations in their paintings. The children were asked to depict "what peace would look like," and they made their artworks in a school program sponsored by the International Cultural Center for Youth, in Jerusalem, shortly after the 1967 Six-Day War.

Also known as the June War, the 1967 Arab–Israeli War, or the Third Arab–Israeli War, the Six Day War was an armed conflict fought in The Levant, Middle East, from the 5th to the 10th of June, 1967, between Israel and a coalition of Arab states, namely Jordan, Syria and Egypt (then known as United Arab Republic), Iraq, Saudi Arabia, and Lebanon. Israel captured and occupied the Golan Heights, the West Bank (including East Jerusalem), the Gaza Strip, and the Sinai Peninsula – resulting in the death of over 20,000 Arab troops and the displacement of hundreds of thousands of civilians who fled or were expelled. The Israeli-Palestinian struggle followed Israeli military occupation of the Palestinian territories in the 1967 Six-Day War, and it has lasted fifty-five years. Actions by the Israeli government, the Palestinian Authority, and Hamas governments all have resulted in the suffering of their citizens; the peace that the children dreamt of in their beautiful, vivid work lives through their art and other peace-building efforts.

There have been formal discussions and treaties, such as: the Camp David Accords of 1978; the staged withdrawal from Sinai in 1982; the Israel-Jordan Peace Treaty in 1994; and Israeli disengagement from Gaza in 2005. Importantly, grassroots peace-building movements are viable in Israel, Palestine, Jordan, and other parts of the Arab-world. They call for positive partnerships and constructive action among citizens, with such organizations as Combatants for Peace, Women Wage Peace, Hand in Hand, and the Parents Circle - Families Forum. These initiatives help remind us that ordinary people, not just governments, can bring peace.

The Gottesman Libraries presents Part I of the newly conserved collection. These artworks were chosen to highlight long lasting hope for peace, with shared symbols of our humanity and respect for national identity, humane treatment, friendship, world heritage, trade, agriculture, and most importantly, learning. While the artworks were created in a time outwith children living under the Occupation, they add significant depth, breadth, and scope to our complex thoughts and continuing conversations about peace.

This exhibit is designed by Emily Sang, Library Associate, Art and Design, and co-curated by Jennifer Govan, Library Director and Senior Librarian, in consultation with the faculty and staff of Teachers College, Columbia University. It includes thoughtful curriculum questions for reflective discussion. The music for this exhibition is inspired by popular songs of peace, children, love, hope, and togetherness, from the 1960s to the present day.

Let Us Put Out the Fire Of War is made possible thanks to the generous support of the Myers Foundations. Part Two of the Passow Collection of Israeli Children’s Peace Art will be exhibited in 2023. 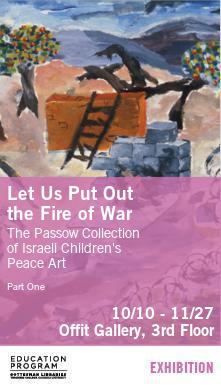 Let Us Put Out the Fire of War, by Yosef Kelver, from The Passow Collection of Israeli Children's Peace Art, Courtesy of Teachers College, Columbia University

Back to skip to quick links